I saw that post about a tournament. Are you sure you're up for that? It looked like a friend of yours wasn't happy about it. It seems pretty suspicious to me, too. Those 'Seekers' sound like the guys you had a run-in with. Do you know where it's being held? 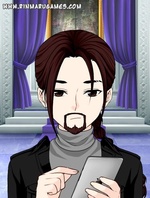 Sorry for the late reply. I haven't been able to get to a computer before tonight. I was at first okay with it because Mr. Kent had been hoping to enter me into a tournament of some sort before so I could get experience fighting against other combatants but... There really aren't a lot of rules here when it comes to the fights. Just that you cannot kill your opponent and the fight is over when the opponent forfeits. Many of the combatants have left the field in terrible conditions. I managed to get through the first round, but only by accident.

As for your suspicion, I can see where that is coming from. There is something off about this place. The staff are weird. And the battle arenas are all really creepy. I saw as many battles as I could and every one of them happened in a completely empty abandoned places. Some filled with bodies. I don't know where this place is, or even where these places we are fighting are. Nothing has looked familiar.

The Seekers are exactly the same people we ran into.